These are photos I wanted to show off. Ones that are on the web for their own sake, and not to decorate some other page (though if I see a spot for one on some other page, I'll move it there). As of the end of May, 1998, when I'm creating this gallery, there won't be a whole lot here, but as I get time (and access to a scanner), expect this gallery to grow. Also expect the contents to change a bit as I get tired of some images or as my standards improve. (Hey, I'm still learning photography -- as I get better, some of my earlier shots may not seem as show-off-worthy.)

I plan to switch to a thumbnail format (you know the drill -- click on the thumbnail to see the full-size image) in the future. For now, please bear with the current format.

Pentax H3, 55mm Auto-Takumar lens with 50mm Zuiko lens reversed on the end of it, Kodak Ektapress PJM film metered at about 500 ASA. f/16, and I don't remember the shutter speed.

This is a tuning post of one of my mandolins. There is some pretty intense vignetting with this setup, which you'll see again on some of my other macro shots. It was lit by daylight coming in through a window, as I recall. 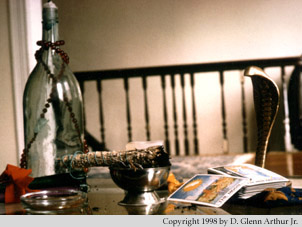 Pentax H3, 55mm lens, Fuji Provia 1600 slide film, pushed to 3200 ASA. Scan is from a print made from the slide. I'm afraid the scan doesn't do justice to the print, and the print isn't as good as the slide.

I was visiting friends in Boston when I glanced at their coffee table and realized that by moving some books out of the way and nudging a card over, I'd have a cool photograph. The object with a charred end resting on the silver bowl is a bundle of sage, which is burned to purify an area. The cards are a tarot deck.

Olympus OM-10, 50mm lens, I'll have to look up what film. Aperture was probably f/16, shutter open for a few minutes.

This was taken at the Pennsic War, in the middle of the night, illuminated by lightning. I took several pictures by leaving the shutter open and waiting for a lightning flash, then closing the shutter. This is cut from the center of one of those photos, in which the first flash didn't strike me as being bright enough, so I waited for a second flash. There was a fellow at the top of the hill in the first flash, and the same fellow appears again, off to the right of the road, in the second flash.

A Splash Of Purple 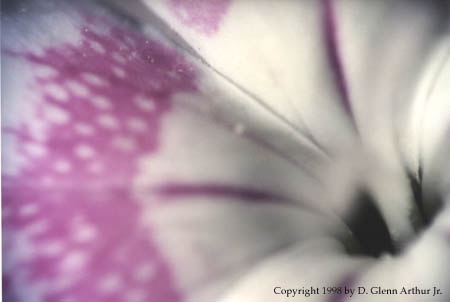 I saved a larger copy of this in a BMP file to use as Win95 wallpaper. Small white and purple flower in my front yard, seen in extreme close up. This setup produces an image on the negative a little more than two and a half times life size.

This is the triple-exposure I mentioned on a Pentax-users mailing list 'cause I was so pleased I'd gotten away with it. I'm going to try again later, using a flash to illuminate the street a little more, which should allow me to expose the traffic light itself a bit less. The idea was to get the traffic lights with all three colours lit. Why? Well, it seemed like a good idea at the time!

The artistic composition of the shot isn't great, but hey, it was more a technique experiment than anything else. I wanted to try a trick I'd read about. :-) 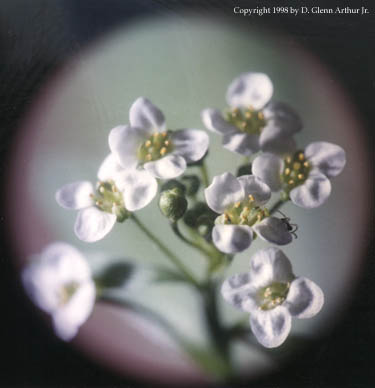 More flowers in my front yard. I went out to shoot one flower in particular, but the shots I like best from that roll are all of other flowers. Go figure. This picture is also in the June 1998 Pentax Users Gallery.